Over the years, 60 and counting, Royal has encountered its fair share of unique and challenging projects. "No" is not a word that exists in the Royal vocabulary. If there is a challenge to be had, it is a challenge worth conquering. This is a view Royal employees are hardwired to believe in. After all, what fun would it be if every day was the same? "We love a challenge!" is our slogan and we're sticking to it!

Here is a look back at some of the more unique and interesting "challenges" we've conquered over the years.

If installing signage in a brand new state of the art prison wasn't unique and interesting enough, Royal was tasked with added unique challenges such as strict security requirements, tamper proofing signs and limited time constraints. About as unique as it gets. In the summer of 2005, Royal was selected as the official medals engraver for the World Masters Games being held in and around Edmonton. After an athlete won a medal, they had the option of having it personalized with their name, date and any other info about their win they wished to commemorate. With over 21, 000 athletes from 89 countries, this was no easy feat. To add to the special occasion, Royal also included the option of having their medal mounted in a beautiful gold, silver or bronze frame. In order to accommodate the high demand for medal engraving, Royal had an engraving booth set up at the event headquarters in the Shaw Conference Centre as well as at various event locations in and around Edmonton. To increase access to different sites throughout the day, one of Royal's vans was turned into a mobile engraving unit.

The event was a massive success for the organizers and the city. Royal was proud to have played an integral role in helping visitors and athletes from all over the world feel welcome while also having the opportunity to send them home with personalized souvenirs to remember their great achievements from a fantastic week! 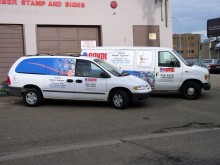 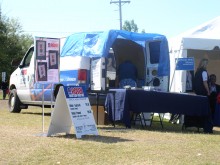 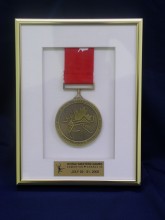 University of Alberta Centenary Celebrations "Tory on a Stick" - December 2007

In late 2007, Creative Services at the University of Alberta approached Royal with a rather strange and very unique request. They needed 700 heads on a stick and they needed them ASAP! Of course, this being 2007 and not medieval times, it was a request for cutout prints of the U of A's first president, Henry Marshall Tory, and not actual heads on a stick.

The University of Alberta was getting ready to celebrate its centenary when a couple days before a media event, organizers decided it would be neat to give all those in attendance a Henry Marshall Tory "mask" of sorts. Given that Henry Tory was the first ever president of the U of A and a large part of why the University got to where it was, it seemed to be a fitting idea. The only problem, how on earth would they make them in such a short amount of time? The task fell into Royal's capable and willing hands. In just a matter of two days, the masks had been designed, manufactured and delivered to the client. The event went off without a hitch and the "masks" were a big hit! Do you have a unique project that you would like help with? Give us a call or send us an email; we love a challenge!