Did you know that you can change the die on a Trodat self inking stamp? We do this for many of our customers so they can reuse a unit when an employee name needs to be changed, a new account code needs to be used and many other reasons. It will save you the cost of buying a whole new unit and the process is very simple.

A picture is worth a thousand words so we've created a slideshow to illustrate the steps. For your convenience we have also written out the steps below. Contact us as 780.426.4676 to order your replacement dies.

How to change the die on your Trodat self inking stamp - Created with Haiku Deck, presentation software that inspires

1. Remove the ink pad and stamp a  few times to remove the excess ink from the die.

2. Flip the stamp upside down and note the orientation of the letters on the die.

3. Lift up a corner of the die using a thin flat tool. We use an exacto knife (use knife safety!). A pen or ruler also works well.

4. Remove the rest of the die with your fingers.

5. Peel back the double sided tape on the replacement die.

6. Center the die on the bottom of the stamp in the same orientation as the previous die. You may need to use a new ink pad if the die has left a permanent indentation on the ink pad.

7. You can change the graphic at the top of the stamp by prying open the cover with a pen or your fingernail and then replace the piece of paper with an updated imprint.

The Royal Glenora Club in Edmonton, Alberta recently completed a multi-million dollar renovation to their ice rink.The rink has an important and decorated history as the home to many previous world and Olympic champion figure skaters. To commemorate these athletes and the history of the Royal Glenora rink, Royal was tasked with manufacturing and installing in the rink, 8 large 4' x 8' signs featuring the athlete's names and championships won. A "Wall of Honour" featuring names like Kristi Yamaguchi, Kurt Browning, Jamie Sale and David Pelletier now adorns the north wall of the Royal Glenora rink—reminders of a storied past for champions of the future! 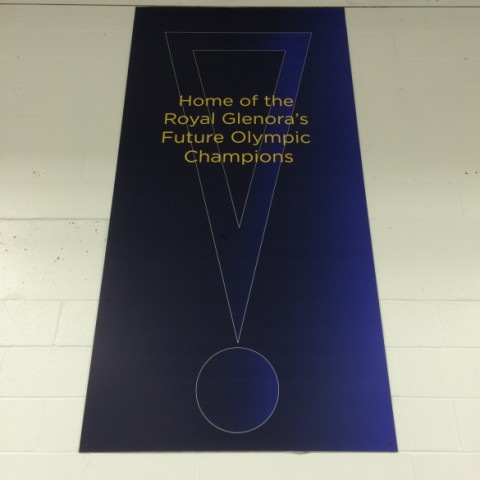 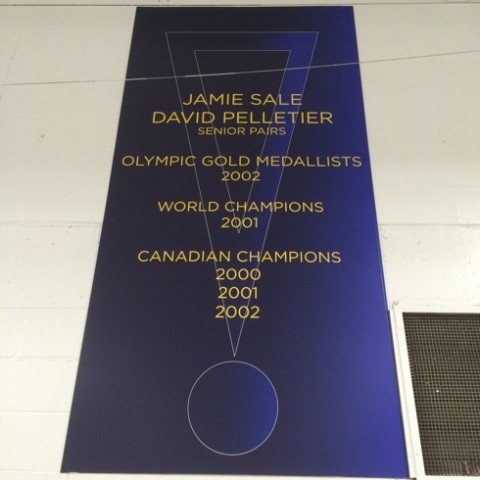 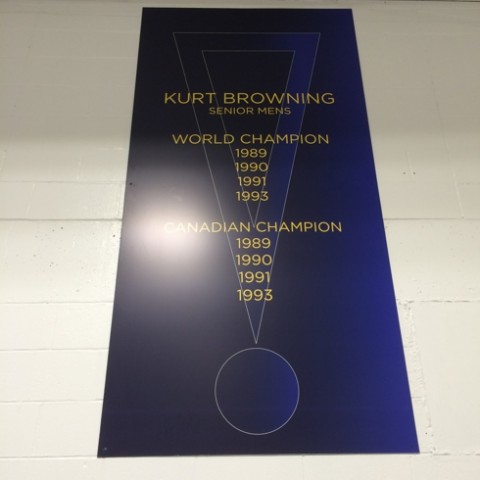 After living in Alberta for over 30 years I've grown to really treasure every summer afternoon and warm fall days. I don't like the cold so I am in a constant state of denial about when winter is coming. However, today when I was outside on a walk during my lunch break there was a banner on the building a few doors down from us advertising a sale on toques. It was very Canadian, very Albertan and it was a sign that I could not ignore winter any longer.

Perhaps if I paid more attention to the natural world I would see some of the signs of a harsh winter, such as the ones listed below from The Farmer's Almanac, and not be so shocked when the white flakes start falling down.

In the sign industry we don't have any indicator's of a harsh winter but we do know that winter is around the corner when our clients start ordering 2 kinds of winter signs.

The most common type of winter sign clients order are "CAUTION FALLING ICE & SNOW" signs. These are usually done as sandwich boards and are very popular with property managers and business owners. Other variations on the message include "Caution Slippery When Icy" and we can include graphics to help you illustrate your point.

The other type of sign that is becoming more popular when winter approaches is the "No Idling" sign. The City of Edmonton passed a new "Be Idle Free" bylaw that came into effect January 1, 2013. Although the bylaw is only in effect for schools and hospitals, many condo complexes and organizations like the University of Alberta have had signs made that encourage people to not idle their cars. The City of Edmonton has an informative website that has tips on how to lessen the impact of idling.

For the better part of a year, Royal Rubber Stamp & Sign Co. has been undergoing renovations to our main branch just north of downtown Edmonton. During this time, I have stumbled upon all kinds of photos and memorabilia from Royal's proud and storied history. I figured I would take this opportunity to share some of my finds as they not only show a unique look back at Royal's past, but also offer a glimpse into Edmonton's history. This is a Royal history. Enjoy! 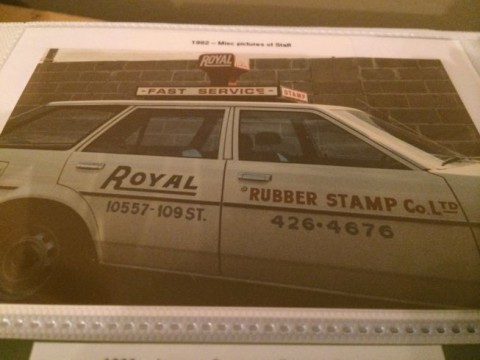 The stamp handle was a signature of Royal Rubber Stamp's vehicles from the 1960's to the late 2000's. This photo dates back to 1982! Do you remember seeing the "stamp" driving around the streets of Edmonton? 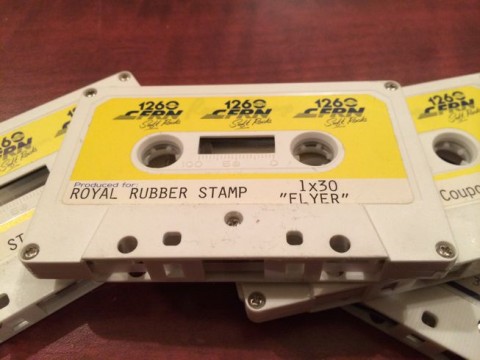 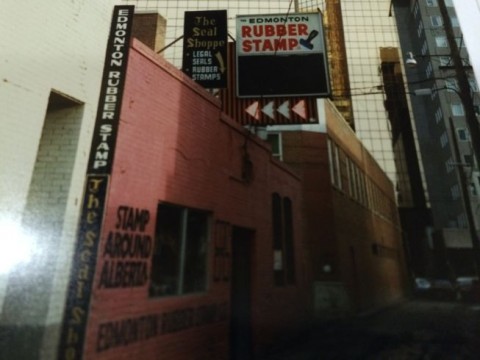 In the early 80's, Royal Rubber Stamp purchased Edmonton Rubber Stamp. This was the shop located in the alley off Jasper Ave. and 102 Street. Notice Scotia Place in the background? Completed in 1983, Scotia Place was only a year old when this photo was taken in 1984! Prior to its current downtown home at 10633-109 st., Royal was located just a couple blocks south at 10557-109 st. In recent years the old shop was home to a music rehearsal studio (Sound Check Rehearsals), but unfortunately now sits empty. 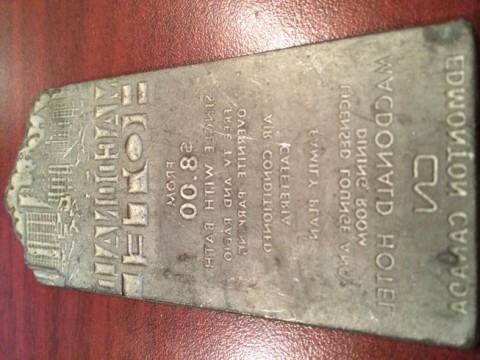 Though we're not entirely sure what was printed for the Macdonald Hotel using this die, we know it likely dates back to the 60's. Check out those room prices! I hope you've enjoyed this little journey back in time! I'll do another one of these in the future. In the meantime, if you'd like to see more of Royal's history, be sure to follow us on twitter and search the hashtag #royalyeghistory.